The Minnesota Indian Gaming Association (MIGA) will hold its 2013 golf tournament on Monday, June 17, starting at 10:00 am at The Meadows at Mystic Lake Resort & Casino. The gathering is the organization’s only annual fundraising event. Proceeds help defray association operating costs. The event is co-sponsored by the Shakopee Mdewakanton Sioux Community and Wells Fargo.

MIGA Executive Director John McCarthy said the tournament is designed to give tribal leaders and staff an opportunity to socialize with their vendors and suppliers. MIGA tribes spend more than $539 million annually purchasing goods and services for their tribal gaming and governmental operations from vendors located in Minnesota and throughout the midwest. Those purchases are a significant part of the $2.75 billion in total economic impact generated by Minnesota Indian gaming.

“The tournament is a great chance for tribal leaders to express their appreciation to the vendors,” said McCarthy, “and it also gives the vendors an opportunity to say thanks for the business, and show their support for the tribes.”

The tournament is a three-person scramble with two teams on a box. The day will conclude with a social hour starting at 2 pm, and awards luncheon at 3 pm. Fees are shown on the flyer below. 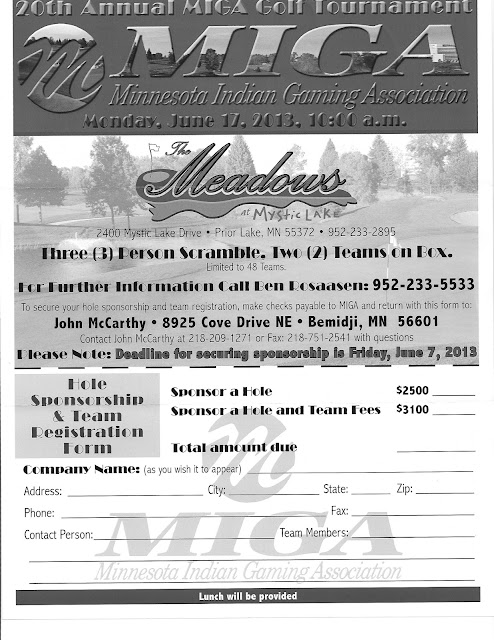