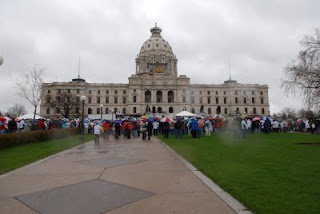 Despite rain, cold winds and 40-degree temperatures, an estimated 3,000 tribal employees, tribal members and supporters gathered on the mall in front of the Minnesota State Capitol yesterday to highlight their concerns about potential tribal job losses if the state legislature authorizes slot machines at licensed racetracks in Minnesota. The “Don’t Gamble with Our Jobs” rally was organized by the Minnesota Indian Gaming Association (MIGA).

Rally participants came from every reservation in Minnesota, and from urban and rural communities across the state. More than 55 buses lined the streets near the capitol building as the event got underway.

“Chairman Kevin Leecy of the Bois Forte Band of Chippewa said the tribes felt it was important to show legislators how many people are worried about losing their jobs to state-sponsored competition. “More than 40,000 people in Minnesota depend on tribal gaming, directly or indirectly, for their jobs,” Leecy said. “Some of us could be forced to lay off as much as one-third of our work force if we end up with state-sponsored racinos right in our own backyards.”

“Ernie Stevens, Jr., Chairman of the National Indian Gaming Association (NIGA), also addressed the rally. “Looking out at this great crowd, I see Indian and non-Indian people standing side by side, fighting for their jobs in tribal gaming,” Stevens said. “We thank you for being here, and for supporting the great work that these tribes are doing for their own communities and for their neighbors. We’re all in this together.”

“Chairman Stanley Crooks of the Shakopee Mdewakanton Sioux Community closed the program by thanking participants, and expressing special gratitude to the employees of his own tribe who were present.

“Without you, we would never be able to do the things we do,” said Crooks. “Over the years you have not worked for us but with us. We are so thankful for your loyalty and support.”

MIGA Executive Director John McCarthy said no matter what form gambling expansion takes in Minnesota, the state’s Indian tribes will be hurt.“Minnesota is a mature gaming market, with very little room for growth,” McCarthy said. “That means the state-sponsored casinos will just shift existing business away from tribal facilities. When tribes start losing revenue, they’ll not only have to lay off employees, but they’ll also have to cut essential programs and services for their members. It’s a lose-lose situation for tribal governments and Native American families, as well as our gaming and government workers.”

The hearing on the House racino bill was set for yesterday, but postponed due to the illness of the committee chairman. Tribal representatives are expected to testify as House and Senate versions of various expansion bills work their way through the legislative process in the coming weeks.

“We’re fighting an uphill battle, but the tribes are used to being in that position,” McCarthy wryly observed. “Somebody’s always after us, it seems.”