Floyd “Buck” Jourdain, Chairman of the Red Lake Nation, has issued the a statement paying tribute to Chairman Stanley Crooks, who died Saturday after more than two decades of service to the Shakopee Mdewakanton Sioux Community (SMSC) and MIGA.

“It is with heavy hearts that the Red Lake Tribal Council acknowledges the passing of Chairman Stanley Crooks, who passed on August 25, 2012. Chairman Crooks was a dear friend of the Red Lake Band of Chippewa Indians.

Chairman Crooks was well revered, and respected by all Minnesota Indian leaders. His leadership and genuine concern for all Indian nations will be missed. Chairman Crooks continued the legacy and mission of his father, Norman Crooks, who was a pioneer of Indian gaming. Stanley fought hard to preserve gaming for what it was intended for, to benefit Indian people who have little opportunity.

Chairman Crooks and the Shakopee tribe generously contributed millions to Indian country, asking nothing in return. Here at Red Lake, Shakopee grants helped build two Boys & Girls Clubs, a skate park, basketball courts, and provided the startup money so that the Red Lake Band could breathe life back into the Red Lake fisheries and get people working again.

It brought tears to Chairman Crooks’ eyes when he observed the people at the fisheries working, feeling good and taking home a paycheck to their families. He was quoted as saying, “Now that’s what it’s all about! That’s why we do what we do.” He was equally proud of the fact that Shakopee played a part in providing a safe place for reservation kids to play and flourish at the Boys & Girls Clubs both at Red Lake and in Ponemah.

In the midst of a tough economic crisis in America, when banks would not loan money to Red Lake or wanted to gouge the tribe with high fees, Shakopee provided a loan to the Red Lake Band with low interest rates which enabled us to build the Red Lake casino, a convenience store, and a tribal justice complex. Also, the forestry greenhouse, a police substation in Ponemah and a new elderly nutrition building were projects that were completed with the help of the Shakopee Mdewakanton Sioux Community.

Without the leadership and support of Chairman Stanley Crooks and the rest of his Tribal Council, these projects may not have come to reality as quickly and as easily as they did. Some would not have happened at all.

The Chairman was uncompromising in his belief that Indian people come first. He was a strong leader with a big heart and a good man, who led with wisdom and integrity. He will be missed.

Our sincere condolences go out to his family, the Shakopee Tribal Council, and the entire Shakopee Mdewekanton Sioux Community.” 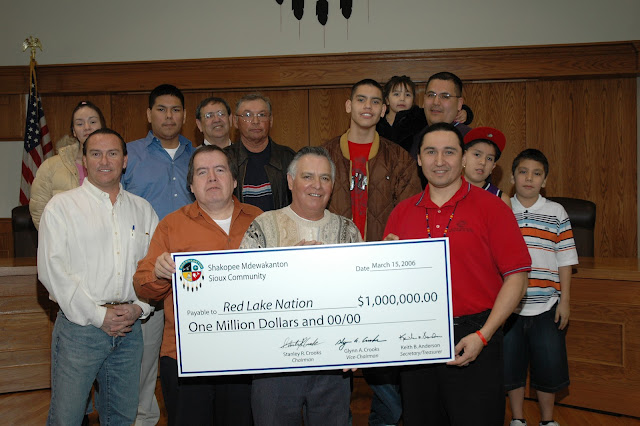