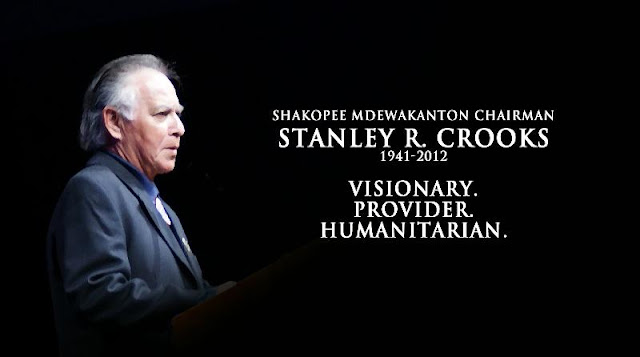 “This past Saturday, I was notified that Shakopee Mdewakanton Sioux Community’s Chairman Stanley R. Crooks began his journey to the spirit world. This comes only two days after my visit with him at the St. Francis Regional Medical Center in Shakopee, Minnesota.

“Stanley Crooks was an outstanding leader, chief, and visionary. In his life and leadership, he exemplified the Dakota virtues of courage, respect, generosity and wisdom. Over the past twenty plus years, Chairman Crooks showed the courage to always stand up for Indian sovereignty in the Halls of Congress, the State Capitol, and at home. Stanley always stood strong for the integrity of the Indian Gaming Regulatory Act, which he viewed as a modern day treaty.

“Chairman Crooks respected his people, neighbors, tribal, state and Federal leaders, and they respected him. With his leadership and the Shakopee Mdewakanton’s generosity are legendary. Traveling through Sioux country, one can see Shakopee’s support for other Indian tribes–at Rosebud, the Turtle Creek Crossing Grocery Store; at Pine Ridge, Prairie Winds Casino, at Standing Rock, the new wing at Prairie Knights Hotel; and at Cheyenne River, the nursing home. These are just a few examples of his determination to support Indian country.

“Chairman Crooks had a great vision for Indian country, as sovereigns we are part of the American family of governments and our children look forward to a bright future. He saw his people lifted above the constraints of poverty and instilled them with the strength and resilience that you see today for the Shakopee Mdewakanton Sioux Community. Chairman Crooks also had the wisdom to listen to others and respect their views.

“Over the recent years, we had direct challenges to our efforts in Washington, DC and Chairman Crooks came in to outweigh these demoralizing threats by using his own voice to share the real benefits of Indian gaming. Time and again, Chairman Crooks demonstrated his unwavering leadership in support of Indian sovereignty. He called upon tribal leaders to develop a plan to educate Congress on the benefits of Indian gaming and the strength of tribal self-determination. His leadership was the backbone of the tribal government effort to defend Indian sovereignty.

“Under his leadership, the Shakopee Mdewakanton Sioux Community members have approved community donations of more than $243 million to tribes and charitable organizations since 1996 and tribal loans of more than $450 million for economic development and community development. He served as Chairman of the Shakopee Mdewakanton Sioux Community for more than 20 successive years and was reelected for a new four-year term of office in January of 2012.

“National tribal leaders selected Stanley Crooks for the Wendell Chino Humanitarian Award in 2005. This award recognized his commitment to the advancement of tribal sovereignty. And in 2010, they gave him the Chairman’s Leadership Award of Excellence for his environmental advocacy work. These awards are the highest honors NIGA gives to leaders dedicating their lives to making a better world for their people. Chairman Crooks has surely demonstrated that not just to his people, but also to his neighbors and other tribes.

“Every time that I visited with the Chairman, I walked away motivated and energized. As soon as I heard of his passing, I immediately notified my son, Brandon Yellowbird Stevens Councilman at Oneida Tribe of Wisconsin, who then informed our tribal officials. I then informed former Oneida Chairman Rick Hill. Chairman Hill, who previously served as Chairman of NIGA, made the introduction and developed my friendship to Chairman Crooks.

“When I last saw Chairman Crooks, I assured him that we will stand united with our tribes and that his vision will continue with our leaders. He taught us well and I thank him for his knowledge and generosity. Today, you can feel the immeasurable impact he gave his people and to Indian country.

“He was a leader for many and on behalf of the National Indian Gaming Association, we thank Chairman Stanley Crooks for his tenacity, quick wit, and passion.”